Aesthetic lasers have been perfected over the years to optimize results and minimize “downtime.” Scientists have been working with skin lasers since the early 1900s, trying to perfect their use and minimize the side effects. One of the newest developments is the Halo Laser, which is the first hybrid fractional laser for skin resurfacing.

Non-ablative lasers do not remove any tissue, but instead target deeper tissue to stimulate collagen growth.

Halo is the first fractional laser that combines both ablative and non-ablative lasers at the same time to provide a treatment that effectively reduces significant signs of aging, sun damage, and scarring, with reduced downtime when compared to traditional laser treatments. It is more comfortable, faster, and patients can return to normal life much more quickly with Halo — and the results are amazing. It literally combines two treatments in one! Prior to its release, patients would choose either an ablative or non-ablative laser treatment for their session, each with its own benefit to the skin. Now, with Halo, patients are getting the results from both at the same time and seeing better results — and much faster. 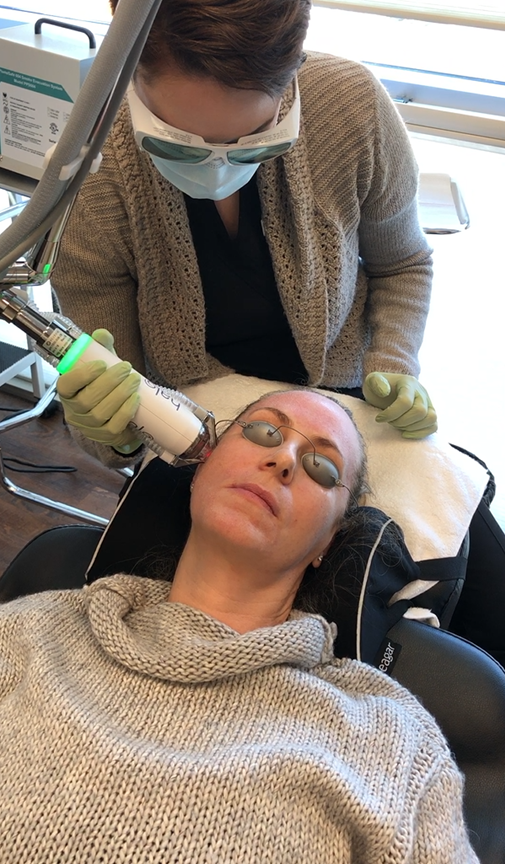 Synergy’s very own Dr. Gabriele Weichert was thrilled with her Halo laser treatment. Back to work after 3 days (compared to 5-7 days with traditional resurfacing lasers) and a fresh glow, her results speak for themselves.

To book your free consultation and find out more about how Halo can help you glow, get in touch with us today!

So What is Dermal-Infusion, Anyway?

Can Collagen Supplements Tighten Your Skin?

How To Use Topical Retinol

How to Treat Leg Veins

What To Expect From CoolSculpting

How to Eliminate Chin Fat

Treatment for Sun Damage this Fall

A Complete Guide to Fillers

Are You a Good Candidate for BOTOX® Wrinkle Relaxation?

Get “Summer-ready” - Winter is for leg veins!

Disclaimer: The information throughout this plastic surgery and skin care website is not intended to be taken as medical advice. The information provided by Synergy Medical Aesthetics is intended to provide general information regarding breast augmentation, breast lift, liposuction, tummy tuck, facial plastic surgery, Belkyra, BOTOX, sclerotherapy, facial vein removal, and more for residents of Nanaimo and nearby areas of British Columbia. If you are interested in finding out more, please contact us today for a personal consultation.